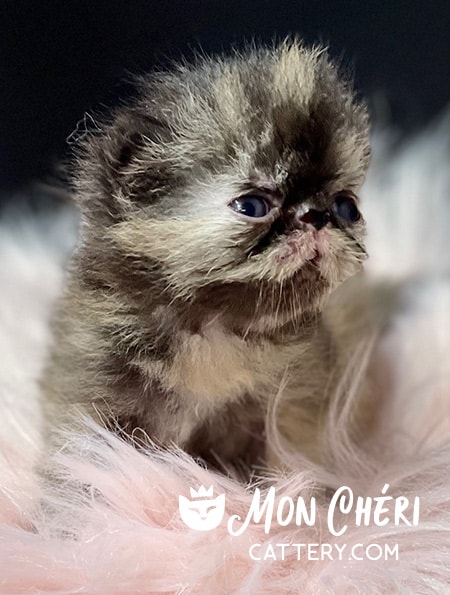 Love the Persian’s sweet, docile personality, but don’t want to deal with the hassle of keeping its coat tangle-free? Consider owning an Exotic Shorthair, kitten. The Exotic Shorthair kitten breed is nearly identical to the Persian, save one big difference—it has short fur. Here are seven facts about the friendly, flat-faced kitty.

1. THE EXOTIC SHORTHAIR IS A RELATIVELY NEW BREED.

There are a few tales regarding the Exotic Shorthair’s origins, but this one’s the most common: Sometime in the 1950s or 1960s, American Shorthair breeders decided to mate their cats with silver, green-eyed Persians to create short-haired felines with the same lovely coloring. The resulting kittens didn’t resemble their American Shorthair parents. In fact, with their flat faces, round, stocky bodies, and snub noses, they looked more like Persians. A breeder named Jane Martinke took notice of the cats, and in 1966 she proposed to the directors of the world’s largest registry of pedigreed cats, the Cat Fancier Association* (CFA), that the unique shorthairs be used to create a new breed.

Cat fanciers originally proposed that the new breed be named the “Sterling,” since the original breed standard called for the cats to be silver. However, the cat was called the Exotic Shorthair instead, because the grey-ish coloring was new and “exotic” among American Shorthairs. Eventually, the breed standard was opened up to include cats of all colors and patterns.

Over the years, breeders outcrossed Exotic Shorthairs with Burmese and other cats to perfect its short, plush coat. The offspring were later mated back to Persians, resulting in the modern Exotic Shorthair breed.

Today, the CFA simply refers to the cat as “the Exotic,” whereas other cat organizations around the world still call it the Exotic Shorthair.

2. THE EXOTIC SHORTHAIR HAS A SHORT PLUSH COAT

The Exotic Shorthair’s fur is short, but plush. That’s because the kitty has a double-layer coat, with a thick, downy under-layer that lifts the topcoat away from the body. This trait is inherited from the Exotic’s Persian ancestors, and is unique among the various shorthair breeds

The Exotic’s low-maintenance coat doesn’t shed much, so owners only have to give it a weekly comb. However, owners do have to wipe and clean the kitten’s eyes, which, thanks to its flat, pansy-like face, are prone toward tearing up and staining its fur. And because of its short nostrils and heavy coat, it’s very sensitive to heat.

Persians are so calm that they’re often referred to as “furniture with fur.” The Exotic Shorthair has a similarly chill personality, but thanks to its shorthair ancestors, it’s a lot livelier than the Persian.

5. EXOTIC SHORTHAIR KITTENS COME IN ALL SHADES AND PATTERNS

Exotic Shorthairs come in all patterns and colors, ranging from black, white, red, chocolate, cream lilac, and tabby to Calico and a even colorpoint Himalayan. As for their eyes, they range from either blue or blue-green to brilliant copper.

With their thick, short-legged bodies, wide necks, and large heads, the Exotic Shorthair looks kind of pudgy. The Exotic can weigh up to 15 pounds, but most of this weight is due to its dense bones—not because it’s actually fat.

Mon Chéri is a CFA* registered breeder of pet & show-quality Exotic Shorthair kittens for sale & Persian kittens for sale (or Exotic Longhair kittens) that are outstandingly beautiful, friendly and come with a health guarantee!  Our kittens are available in the most desired shades of chocolate, calico, lilac, red, cream, bicolor, solid, tabby, colorpoint, black smoke, and the rare tortoiseshell.

*CFA or The Cat Fanciers’ Association, Inc. is currently the world’s largest registry of pedigreed cats and known as the most prestigious pedigreed cat registering association in North America. See our Mon Chéri Cattery profile on CFA.