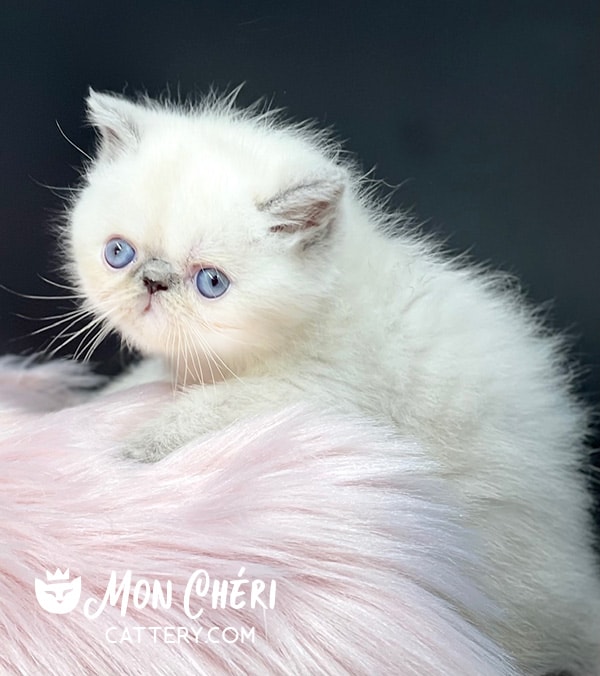 Look no further! Mon Chéri offers safe shipping options across the USA. View our Exotic Shorthair kittens for sale. For example we can meet you at either the Fort Smith Airport (FSM) or Fayetteville Airport (XNA). Pet Nanny is also available and can safely deliver in the USA or internationally. Dallas, Ft Worth, Austin, Texas, Minneapolis, Minnesota, Chicago, Illinois are within a few hours. We frequently and safely ship kittens to Los Angeles, California, Miami, Orlando, Florida and New York, just to name a few. You are welcome to pickup in person on our farm near Fort Smith Arkansas. Email us for safe shipping options.

Mon Chéri is a CFA registered* breeder of pet & show-quality Exotic Shorthair kittens & Persian kittens (or Exotic Longhair kittens) that are outstandingly beautiful, friendly and come with a health guarantee! View our kitten for sale. Our kittens are available in the most desired shades of chocolate, calico, lilac, red, cream, bicolor, solid, tabby, colorpoint, black smoke, and the rare tortoiseshell.

About Exotic Shorthair Kittens Near Me For Sale

Developed to be a shorthaired version of the Persian cat, the Exotic Shorthair has inherited many of the Persian cat’s traits. They have a massive, broad head with fully rounded cheeks and a short, round muzzle. Their nose is short, showing a pancake like face. Their neck is short and their body is cobby and low to the ground with a short, thick tail.

These cats have dense hair, which is fluffy and slightly longer than the other Shorthair breeds. All Persian colors also occur in these cats. They have a gentle personality and are known to be curious and friendly with other animals. They do not like being alone and need some form of the presence of their owners. They show more affection and loyalty than most breeds and are great lap cats. They are also good mouse hunters. Weekly brushing is recommended.

A new color for the American Shorthair

The breeders of the Exotic Shorthair didn’t set out to get a flat-faced, plush cat.  What they wanted back in the 1950s was an American Shorthair (ASH) that had the Persian’s silver color and beautiful green eyes.

Persian-ASH crosses weren’t allowed by cat associations, but people did it anyway, since it produced such beautiful kittens.  However, the kittens didn’t exactly look like American Shorthairs.

Crossing the Persian and American Shorthair became so common that by 1966 Jane Martinke, an ASH breeder and cat show judge, was concerned that the appearance of the American Shorthair breed was going to change forever.  To save it, she suggested making the new shorthairs a separate breed.  She called them Sterlings because of their beautiful silver fur.  However, since silver is an exotic color for the shorthair breed, the Cat Fanciers Association registered the breed in 1967 as the Exotic Shorthair and accepted not only silver but also every other color and pattern that Persians come in.

Several different breeders got to work developing Exotic Shorthairs, using the Russian Blue and Burmese cat breeds as well as the American Shorthair.  Once the shorthair gene was established, they then bred their Exotic Shorthairs back to Persians to keep the desired physical traits.  This wasn’t easy at first, since many well-established Persian breeders resisted the idea of a shorthaired Persian.  Those who bred both Persians and Exotics had the most success with the new breed.

The Exotic Shorthair resembles the Persian in everything but the length of its coat, which looks short next to a Persian’s luxurious fur but is almost medium in length compared to other shorthaired breeds.  This velvety coat accentuates the Exotic Shorthair’s round body as well as its enormous head and colorful eyes.

The first thing everybody notices about an Exotic Shorthair is its huge head and brilliant eyes.  The Exotic often looks disappointed or anxious, but that’s just an effect of the cat’s shortened muzzle.  Just like the Persian breed, Exotic Shorthairs come in two face shapes:  the round doll-face type and the flat-faced Exotic Shorthair with the forehead, nose, and chin aligned vertically.  Ideally, the top of a flat-faced cat’s nose shouldn’t be higher than its lower eyelids.

The large, round eyes are wide set and may be copper, blue, green, hazel, or even odd-eyed, depending on the coat color.  They appear prominent, though not bug-eyed, when viewed from the side.  Exotic Shorthairs have small ears that tilt forward and blend into the contours of the cat’s massive head.

It’s often difficult to see these cats’ short necks.  Exotic Shorthairs have a “cobby” body.   This cat fancy term describes a short, round shape that looks a little like a corn cob.  These cats have broad chests and muscular shoulders and rumps.  Their legs are short, straight, and heavily boned.  They end in big, round paws with toe tufts.

Both the undercoat and top coat on an Exotic Shorthair are just as thick as on a Persian.  The only difference is length.  It is the dense undercoat that makes these lovely felines look like cuddly toys.

There are some 80 different color combinations for the Exotic Shorthair’s coat.  It may be a solid color or have more than one color.  The Shorthair might also have mixed colors and patterns, say, black and red tortoiseshell or a tabby pattern with bull’s-eye markings on either flank.  Colorpoint Exotic Shorthair cats have the same dark fur face mask, ears, paws, and tail as a Himalayan cat.

Exotic Shorthair cats are mellow but a little smarter and more playful than Persians, thanks to the American Shorthair influence.  These loving, adaptable kitties make good family pets and companions.

Exotic shorthair kittens bond closely with those who give them a lot of love, attention, and respect.  This breed is the most famous for its devotion.  The exotic shorthair kitten is a lap cat.  It will also follow you from room to room.  When you are sitting, it will quietly move closer and closer to you until it is right in your face. It just loves you that much! Exotic shorthair kittens aren’t demanding, though.  They are easily satisfied and very accommodating.

Like any cat, the exotic shorthair kitten may need a little time to get used to new people and situations.  Once comfortable, it will quickly adapt to just about any home environment, including families with children and those with other resident pets, including dogs. The exotic shorthair kitten can be a little bossy with other pets, but it makes a very good companion and therapy animal for people.

If your schedule keeps you away from home a lot, it might be a good idea to get two cats so they can keep each other company. This works best with two exotic shorthair kittens or if you already have an older cat and a kitten, they can learn to adjust to each other.

Kittens are quite lively, but once they grow up, Exotic Shorthairs tend to settle down.  They will lounge around and doze for hours, but unlike their Persian cousins, these Shorthairs will go looking for some fun when they wake up.  And of course they will try to involve you in the game.

When playtime is over, the Exotic Shorthair will happily settle into your lap for a cuddle session or sit nearby, ready to doze off again.  This is a very fun, easy cat to live with.

The exotic shorthair kitten doesn’t shed a lot, except in the spring and fall. The kitten will generally do its own grooming, but it can’t get all the way down to the skin. You should comb out your cat’s twice a week to get rid of dirt and distribute oil evenly along the hairs. A stainless steel comb with both fine and wide teeth on it is ideal for the job.

These cats have shortened lacrimal ducts because of their face shape, so their eyes water frequently.  To prevent infections and make your exotic shorthair kitten happier, just wipe off the goo around its eyes daily with a warm, damp washcloth.

*CFA or The Cat Fanciers’ Association, Inc. is currently the world’s largest registry of pedigreed cats and known as the most prestigious pedigreed cat registering association in North America.